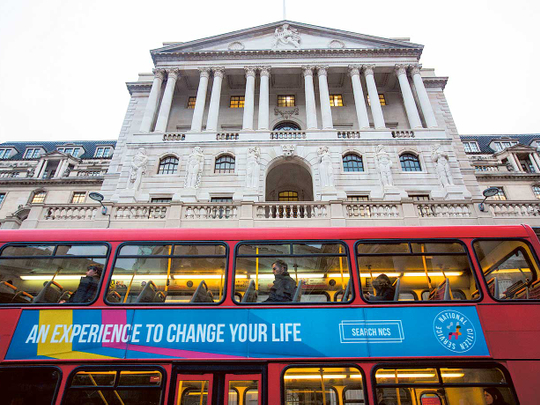 It will be a net positive for banking sector as UK finally gives go ahead for a rate hike. Image Credit: Bloomberg

London: Banking stocks jumped in London as Bank of England policymakers voted overwhelmingly to hike interest rates in a move that’s set to boost profits from lending and income earned by investing deposits.

Lloyds Banking Group jumped as much as 6.9 per cent, Barclays Plc rose 5.6 per cent, NatWest Group gained 4.5 per cent, and HSBC Holdings rose 3.8 per cent. Personal investing firm Hargreaves Lansdown Plc also advanced. Eight of nine officials voted to lift borrowing costs by 15 basis points to 0.25%, in a move that surprised the majority of economists who anticipated no change.

“Rate rises transform the profitability of these banks,” Fahed Kunwar, an analyst at London broker Redburn said. “They make their consensus numbers, and their multiples, much more attractive. It means almost everything.”

Speculation of a hike in the central bank’s key rate intensified on Wednesday as data showed a consumer price surge in Britain hit the highest level for more than a decade. Still, with economists divided, nothing was certain. Investors were left disappointed last month, as rates were held steady, prompting a drop for lenders’ shares. Analysts later factored slower-than-expected hikes into their forecasts, in part due to the emergence of the omicron virus strain and its effect on the economy.

“The 8-1 vote to raise rates is fairly surprising given the emergence of the Omicron variant and uncertainty over the near-term growth impact,” Hussain Mehdi, a strategist at HSBC Asset Management, said in emailed comments.